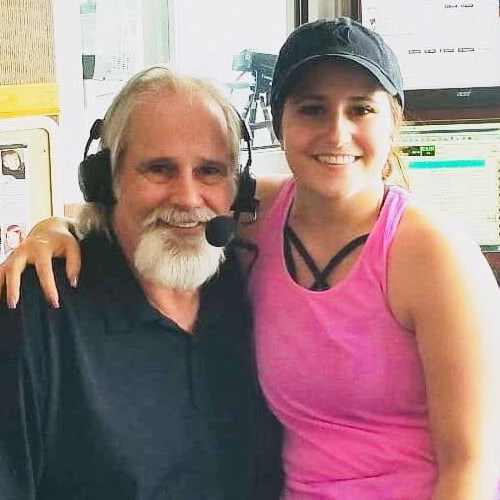 Born in Oklahoma and raised in El Paso, Texas…John made his way to the Gem State to further his education at Idaho State University. “I wanted to move away from home and I figured 1,000 miles was far enough.”

Besides doing his early morning gig, John has been doing play by play announcing for the Idaho Falls Tigers, Skyline Grizzlies and the Idaho Falls Chukars professional baseball team. “Some people ask me how I can do a full days work and then go broadcast a game that night. My answer…I love my job and especially the announcing of ballgames.” Among the highlights: 10 state high school football championships, two state basketball titles, three Pioneer League championships.

On the personal side…John and his wife Kimra–a retired school teacher–have one daughter Karlee, “We were told we couldn’t have any children, were on an adoption list for several years before our miracle child arrived.” And as Paul Harvey used to say…”Now you know the rest of the story.”

After getting his degree in Journalism from Idaho State University, John began his radio career at KSEI in Pocatello…doing news and sports. “My biggest thrill was being courtside on the radio during ISU’s huge upset over college basketball powerhouse UCLA.”

After a quick stop in Blackfoot, John made his way to Idaho Falls and KUPI Radio in the winter of 1983 and he’s been there ever since. First doing news and sports then finally a morning show with Dennis Carlson and that was the beginning of The Breakfast Boys. “I’ve been lucky to have some great partners with me over the years and being part of the lives of thousands of southeast Idaho residents has been a true blessing.”